No one has ever seen an AGI takeoff, so any attempt to understand it must use these outside view considerations

What? That’s exactly backwards. If we had lots of experience with past AGI takeoffs, using the outside view to predict the next one would be a lot more effective.

Two years ago I wrote a deep-dive summary of Superforecasting and the associated scientific literature. I learned about the “Outside view” / “Inside view” distinction, and the evidence supporting it. At the time I was excited about the concept and wrote: “...I think we should do our best to imitate these best-practices, and that means using the outside view far more than we would naturally be inclined.”

Now that I have more experience, I think the concept is doing more harm than good in our community. The term is easily abused and its meaning has expanded too much. I recommend we permanently taboo “Outside view,” i.e. stop using the word and use more precise, less confused concepts instead. This post explains why.

What does “Outside view” mean now?

Over the past two years I’ve noticed people (including myself!) do lots of different things in the name of the Outside View. I’ve compiled the following lists based on fuzzy memory of hundreds of conversations with dozens of people:

What did “Outside view” mean originally?

To head off an anticipated objection: I am not claiming that there is no underlying pattern to the new, expanded meanings of “outside view” and “inside view.” I even have a few ideas about what the pattern is. For example, priors are sometimes based on reference classes, and even when they are instead based on intuition, that too can be thought of as reference class forecasting in the sense that intuition is often just unconscious, fuzzy pattern-matching, and pattern-matching is arguably a sort of reference class forecasting. And Ajeya’s model can be thought of as inside view relative to e.g. GDP extrapolations, while also outside view relative to e.g. deferring to Dario Amodei.

However, it’s easy to see patterns everywhere if you squint. These lists are still pretty diverse. I could print out all the items on both lists and then mix-and-match to create new lists/distinctions, and I bet I could come up with several at least as principled as this one.

This expansion of meaning is bad

When people use “outside view” or “inside view” without clarifying which of the things on the above lists they mean, I am left ignorant of what exactly they are doing and how well-justified it is. People say “On the outside view, X seems unlikely to me.” I then ask them what they mean, and sometimes it turns out they are using some reference class, complete with a dataset. (Example: Tom Davidson’s four reference classes for TAI). Other times it turns out they are just using the anti-weirdness heuristic. Good thing I asked for elaboration!

Separately, various people seem to think that the appropriate way to make forecasts is to (1) use some outside-view methods, (2) use some inside-view methods, but only if you feel like you are an expert in the subject, and then (3) do a weighted sum of them all using your intuition to pick the weights. This is not Tetlock’s advice, nor is it the lesson from the forecasting tournaments, especially if we use the nebulous modern definition of “outside view” instead of the original definition. (For my understanding of his advice and those lessons, see this post, part 5. For an entire book written by Yudkowsky on why the aforementioned forecasting method is bogus, see Inadequate Equilibria, especially this chapter. Also, I wish to emphasize that I myself was one of these people, at least sometimes, up until recently when I noticed what I was doing!)

Finally, I think that too often the good epistemic standing of reference class forecasting is illicitly transferred to the other things in the list above. I already gave the example of the anti-weirdness heuristic; my second example will be bias correction: I sometimes see people go “There’s a bias towards X, so in accordance with the outside view I’m going to bump my estimate away from X.” But this is a different sort of bias correction. To see this, notice how they used intuition to decide how much to bump their estimate, and they didn’t consider other biases towards or away from X. The original lesson was that biases could be corrected by using reference classes. Bias correction via intuition may be a valid technique, but it shouldn’t be called the outside view.

I feel like it’s gotten to the point where, like, only 20% of uses of the term “outside view” involve reference classes. It seems to me that “outside view” has become an applause light and a smokescreen for over-reliance on intuition, the anti-weirdness heuristic, deference to crowd wisdom, correcting for biases in a way that is itself a gateway to more bias... 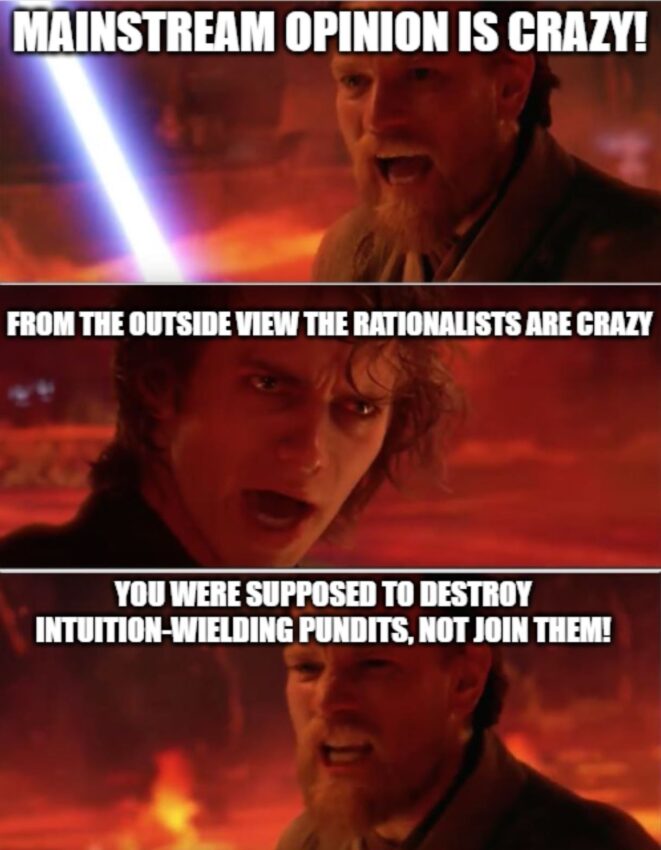 I considered advocating for a return to the original meaning of “outside view,” i.e. reference class forecasting. But instead I say:

Taboo Outside View; use this list of words instead

I’m not recommending that we stop using reference classes! I love reference classes! I also love trend extrapolation! In fact, for literally every tool on both lists above, I think there are situations where it is appropriate to use that tool. Even the anti-weirdness heuristic.

What I ask is that we stop using the words “outside view” and “inside view.” I encourage everyone to instead be more specific. Here is a big list of more specific words that I’d love to see, along with examples of how to use them:

Whenever you notice yourself saying “outside view” or “inside view,” imagine a tiny Daniel Kokotajlo hopping up and down on your shoulder chirping “Taboo outside view.”

Many thanks to the many people who gave comments on a draft: Vojta, Jia, Anthony, Max, Kaj, Steve, and Mark. Also thanks to various people I ran the ideas by earlier.