Now, before I go any further, let me be the first to say that I don’t think we should use this model to predict TAI. This model takes a very broad outside view and is thus inferior to models like Ajeya Cotra’s which make use of more relevant information. (However, it is still useful for rebutting claims that TAI is unprecedented, inconsistent with historical trends, low-prior, etc.) Nevertheless, out of curiosity I thought I’d calculate what the model implies for TAI timelines. 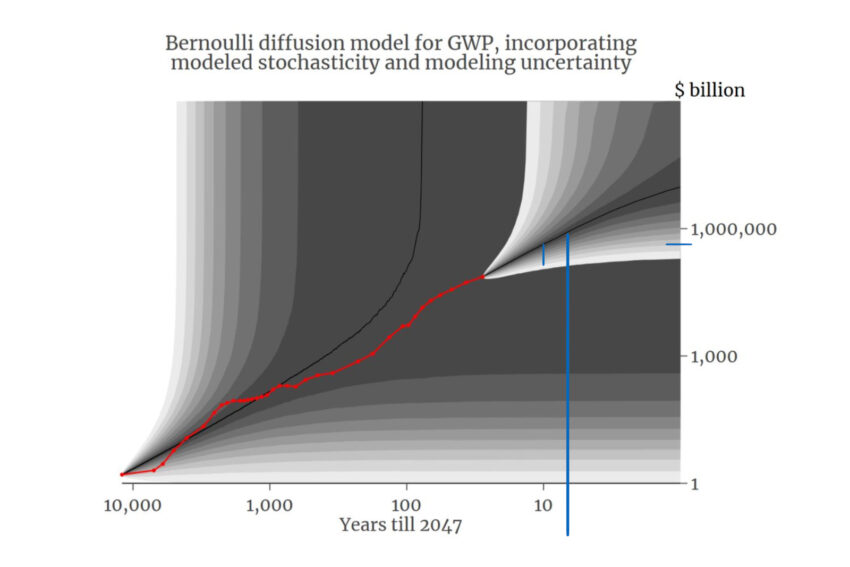 Here is the projection made by Roodman’s model. The red line is real historic GWP data; the splay of grey shades that continues it is the splay of possible futures calculated by the model. The median trajectory is the black line.

This means that TAI happens around 2037 on the median trajectory according to this model, at least according to Ajeya Cotra’s definition of transformative AI as “software which causes a tenfold acceleration in the rate of growth of the world economy (assuming that it is used everywhere that it would be economically profitable to use it)... This means that if TAI is developed in year Y, the entire world economy would more than double by year Y + 4.”

At this point, I should mention that I disagree with this definition of TAI; I think the point of no return (which is what matters for planning) is reasonably likely to come several years before TAI-by-this-definition appears. (It could also come several years later!) For more on why I think this, see this post. [link to be added when linked post appears]

Finally, let’s discuss some of the reasons not to take this too seriously: This model has been overconfident historically. It was surprised by how fast GDP grew prior to 1970 and surprised by how slowly it grew thereafter. And if you look at the red trendline of actual GWP, it looks like the model may have been surprised in previous eras as well. Moreover, for the past few decades it has consistently predicted a median GWP-date of several decades ahead: 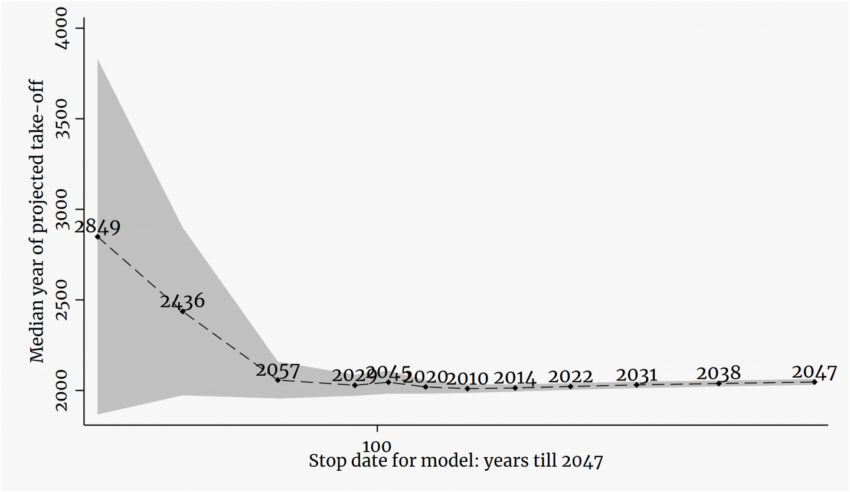 The grey region is the confidence interval the model predicts for when growth goes to infinity. 100 on the x-axis is 1947. So, throughout the 1900’s the model has consistently predicted growth going to infinity in the first half of the twenty-first century, but in the last few decades in particular, it’s displayed a consistent pattern of pushing back the date of expected singularity, akin to the joke about how fusion power is always twenty years away: